Interpreting the Visual 2 – How to avoid the Predictable Part One 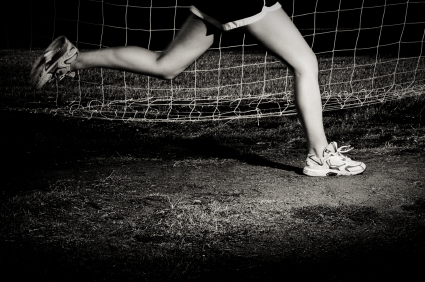 In the last post we looked at three photos – all night shots. I deliberately chose images that didn’t give too much away in terms of story ideas, to give more room for imaginative play.  The challenge was to look beyond the obvious, to add the unusual into the mix. Today’s post looks at the first of the images again (see above) from the point of view of the occupation of the character.

Let’s develop the ideas in the image – woman running. Two  basic storylines could well be:

1. Running alone at night on a dirt track, she is attacked… and all that follows from that.

2. She is in training for a sports event, e.g. a marathon, and evening is the only excercise time available to her. It’s a sacrifice, but she’ll do it.

There’s nothing wrong with these scenarios, but…

Let’s assign each of these occupations to the runner, in turn. What are the potential ideas for story that arise?

MEDIC – a) Runs to forget her greatest surgical error? b) Runs a circuit every night around a derelict site that,  due to an inheritance, she plans to develop as a health club? Her rivals are not happy. c) Trialling a new drug? (This holds great possibilities for delving into espionage, financial conflicts, ethical dilemmas, etc., as part of your plot.)

LAWYER – Finds that the route along which she excercises is: a) Making her ill (polluted)? b) Subsiding... and a children’s play area is close by? c) Full of strange tracks? Opportunities for investigation and issues relating to justice.

SINGLE PARENT – One night every week she is free to pursue her hobby, jogging. She meets a stranger. Chats to him. Feels safe. They start to meet every Tuesday evening, running, chatting, going for a drink. They plan to make more space for each other. He seems a genuine guy. She thinks her daughter will like him. They will discuss the details next Tuesday evening. He doesn’t turn up. She investigates.

POLITICIAN – She works for the Health Secretary and is putting on a show for the press. Basically, she would rather be a couch potato.

TEACHER – a) Finds kids sleeping out in the wilds? b) Teacher grooming a young girl? c) Her Head of Department organising a secret society for teenagers?

CHEF – a) She runs a reputable fish restaurant. Her excercise route winds along a cliff path. She stumbles across a major scheme to subvert EU catch restrictions? b) She provides fresh vegetables for her restaurant. Every night, she runs up to her garden plot to check on her plants. She makes coffee in her shed and designs her menus. She finds love among the allotments?

OIL RIG FIELD ENGINEER – The runner is the only female working on the drill floor. One man’s gender discrimination has escalated to intense bullying. She is ashore on leave. Loves the feel of her feet on firm, dry land.  Does she return and face him or decide to keep running?

HELICOPTER PILOT – She has been involved in a Search and Rescue mission to find a missing child, without success. Each night, after work, she continues to hunt for her in the area she was last seen.

(For some unusual occupations check out my Pinterest board ‘Occupations’ on http://www.pinterest.com/helensea/story-occupations/)

Hope this has given you some ideas. Let me know. In the next post we’ll look further at avoiding the predictable.

This entry was posted in Narrative Spark and tagged 2, How to avoid the Predictable, Interpreting the Visual, Narrative Spark, Part One. Bookmark the permalink.